Brickipedia
Register
Don't have an account?
Sign In
Advertisement
in: Class 2 articles, Sets listed for ages 7-12, 2000 sets,
and 2 more

The Robo Stalker is a large humanoid robot. It has large feet which cannot move, on top of which is the control center. The back of the center opens, allowing the pilot to enter and exit. One of it's arms is a buzz saw, and the other one is a hand/claw. Instead of walking, it rolls on a set of wheels attached to the bottom of it's feet.

The head is a second control center, placed on a rotating brick allowing it to rotate 360 degrees. It has two energy storage compartments, and a double laser. On either side are wings which can be folded up to appear as ears. The head can be detached from the main body, and has a large rocket booster in the back. 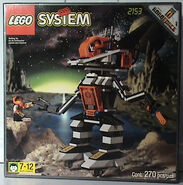