2154 Robo Master is a Roboforce set that was released in 1997. It contains two Roboforce Astronauts.

The Robo Master is the largest Roboforce set released. It is animalistic in shape. It has two legs, which are connected and thus cannot move. They both have many lights and lasers on them, along with a solar panel. In the front part of the main body is a head (the control center). It is large and has multiple lasers.

The head also has two antennae. Beside it arm two arms, each with a wide array of lasers and one with a hand/claw. The Robo Master has a large tail, with two solar panels on it, two lights, and 2 lasers/stingers. In the middle of the main section is a groove, allowing the user to place objects upon. There is also a small spacecraft. It has four thrusters in back, Trans Neon Green lights, and is piloted by one minifigure. 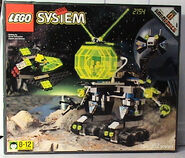 box art
Add a photo to this gallery

Retrieved from "https://brickipedia.fandom.com/wiki/2154_Robo_Master?oldid=1973467"
Community content is available under CC-BY-SA unless otherwise noted.