Brickipedia
Register
Don't have an account?
Sign In
Advertisement
in: Class 4 articles, Sets listed for ages 6 - 14, Ninjago,
and 3 more
English

2174 Kruncha is a Ninjago spinner set released in 2011. It contains Kruncha, a spinner base (which is purple on the bottom and translucent lime green on the top), five cards, a golden double axe, a silver bone, and a spike on a chain.

He is also seen as a contestant along with Nuckals at an arena, but is easily defeated by Kai. 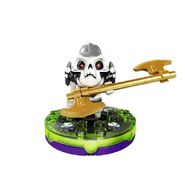