2182 Bulk 3.0 is a Hero Factory set that was released in the second wave of July 2011. The set includes Dunkan Bulk's third variant, counting the second 1.0 mode in the Bulk and Vapour set.

The first variant of Bulk with a higher upgrade than 1.0, this silver Hero is armed and equipped to face the savage creatures of Quatros. Two silver quaza-spike pieces are connected to his forearms, able to be moved up and down. Bulk has no armour on his upper arms. His helmet is shaped like the head of a wolf, and his head and core are orange. Three of his leg armour pieces are the same, and the fourth is the trans-green Savage Planet badge, located on his left thigh. His body piece does not have the extra ball extensions on his shoulders that some other Heroes do.

Bulk's 3.0 specialty is tracking. He is a respected member of Preston Stormer's Alpha Team, and is a good friend of Jimi Stringer. During the attack led by Fire Lord on Tanker Station 22, he was on a jungle planet with Stringer on a mission to acquire an anti-venom for a member that had been infected by a nanobot virus, leaving Julius, Nex and Nathan Evo to assist the Alpha Team against Fire Lord. Bulk is not one of the brightest heroes on the team, but is loyal, and will fight for his friends to the end. He is currently assisting Alpha Team on Quatros to help track down the Witch Doctor and cure him of the corrupted Quaza. 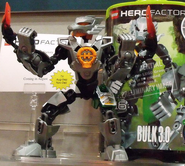 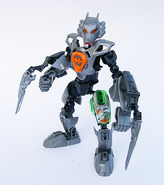 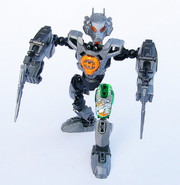 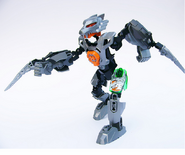 A photograph of the Furno+Bulk combiner set

€9.99 +
Released
2011 +
ShopDescription
Track down Witch Doctor before it’s too … Track down Witch Doctor before it’s too late!</br></br>Calling Hero Bulk! Assist Rocka and Stormer as they try to foil Witch Doctor’s destructive plans. If he removes jungle planet Quatros’ Quaza core, it will break apart. Track Witch Doctor with wolf animal power to stop him before it is too late! Then use the wrist-mounted blades to keep his vicious beasts at bay. Happy hunting!</br></br>* Features wrist-mounted blades!</br>* Use wolf animal power to track and defeat Witch Doctor!</br>* Bulk’s speciality is tracking!</br>* Includes orange hero core on chest!</br>* Stands over 6” (17cm) tall!re on chest!
Theme
Hero Factory +
Title
Bulk 3.0 +
Type
Set +
USPrice
$7.99 +
Advertisement