2191 Furno 3.0 is a Hero Factory set that was released in July 2011. The set includes a red Hero, Furno's fourth variant, counting the second 1.0 mode in the Furno Bike set.

Furno wields a plasma bow on Savage Planet. The only armour pieces not red in the entire set are the transparent green Savage Planet badge, on his right forearm, and the silver body armour piece beneath his chestplate. He does not have armour on either his upper arms or thighs; instead, connected to his arms, he has wings that allow him to fly for short distances. His shoulders are wider than those of some other Heroes, such as Bulk 3.0, and his helmet resembles the head of a hawk or eagle.

William Furno is a recently built Hero that has gained Preston Stormer's full respect. During his creation the maintenance workers noticed something special about him. He is a diehard hero, and has been constantly studied by Nathaniel Zib, due to his unique qualities. He helped stop Von Nebula and his minions and single-handedly took down notorious psychopathic villain Rotor, and helped take down the Fire Lord, Drilldozer, Jetbug, and Nitroblast. 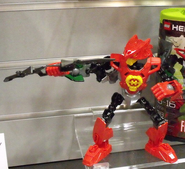 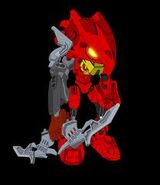 A photograph of the Furno+Bulk combiner set.