2192 Drilldozer is a Hero Factory set that was released in January 2011. It includes 61 parts to build a silver, black, and red coloured villain named "Drilldozer" due to his main weapon being a large drill, plus more weaponry including a blade and a zamor sphere launcher. His mask is one of the new "double sided" masks which are the same masks turned around in a different colour. In the Hero Factory storyline, he is one of the villains for early 2011.

Drilldozer was a villain working for Fire Lord, and attacked a fuel center with the rest of Fire Lord's gang. They defeated the heroes at first and captured Mark Surge, but the upgraded heroes came back and defeated him and the gang. Later, he escaped during the Breakout, but was presumably recaptured. 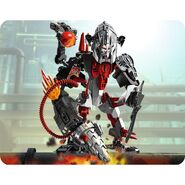 $19.99 +
Released
2011 +
ShopDescription
Drill your way into the tanker station! … Drill your way into the tanker station!</br></br>Attention heroes! Drilldozer is breaking his way into off-world Tanker Station 22 using his multi-tooth turbine-powered drill. He’s not only the strongest of the Fire Lord’s minions, but he’s even more dangerous with his armor plating, red-hot molten spikes, razor-sharp claws and a lava sphere shooter! He’s one tough cookie, so watch out!</br></br>* Use the turbine-powered drill and razor sharp hand-held claw to dig into anything!</br>* Protected with heavy armor plating</br>* Fire at the heroes with shoulder-mounted lava sphere shooter!</br>* Stands over 8” (21cm) tallhere shooter!
Theme
Hero Factory +
Title
Drilldozer +
Type
Set +
USPrice
$12.99 +