2194 Nitroblast is a Hero Factory set that was released in January 2011.

The set includes 57 pieces, which are used to build Nitroblast, a red and black villain with one green eye. Nitroblast has a Meteor Blaster with a red-and-yellow sphere, a Transparent Bright Orange, upside-down 7148 Meltdown tank, and a flame-thrower. He is heavily armoured and his legs are covered in spikes.

Nitroblast was a former explosives worker who went insane and came to serve Fire Lord. He along with his team brutally terrorized the citizens of a fuel station, who managed to contact Hero Factory. The heroes then came and were easily beaten back, with Surge being taken hostage. But the heroes, with 2.0 armour, came back and captured them. He later escaped during the breakout, but was presumably recaptured. 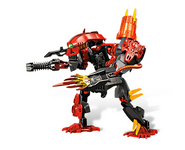