Waspix has four arms, four eyes, a stinger, and looks like a wasp. Her main colour is yellow, she has the same hand pieces as most of the Ben 10 sets, and she includes the same type feet as 7156 Corroder. she also has the same helmet as Scorpio, but in a different colour. Waspix contains yellow transparent armor pieces as wings. she carries two corrupted Quaza spikes.

Waspix' home planet is Quatros. They prefer to live alone, instead of living in swarms, and communicate using buzzing and hissing. Waspix are often seen making fun of other slower creatures, with their speed.[1]

The Waspix do not normally attack without provocation. Witch Doctor added two corrupted Quaza Spikes to several Waspix, with which he controls them.[1] 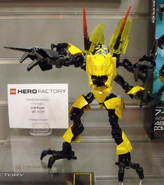 Retrieved from "https://brickipedia.fandom.com/wiki/2231_Waspix?oldid=1986967"
Community content is available under CC-BY-SA unless otherwise noted.