Brickipedia
Register
Don't have an account?
Sign In
Advertisement
in: Class 3 articles, Sets listed for ages 7 - 16, 2011 sets,
and 3 more
English

A Raw-Jaw is red and has two large fists. They have black and silver details, and carriy a corrupted Quaza spike on their backs. His back feet are the same as those of several Ben 10 aliens.

A Raw-Jaw's home planet is Quatros. They are strong, fast and agile as a gorilla, and wield two big tusks like an elephant, which is the reason they have no natural foes. Witch Doctor managed to capture him and fitted him with a corrupted Quaza Spike, with which he controls him. Raw-Jaw is now used to transport the Quaza minerals mined for Witch Doctor.[1] 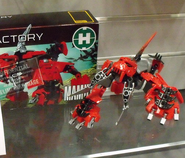 €12.99 +
Released
2011 +
ShopDescription
Overpower the heroes and steal their ar … Overpower the heroes and steal their armor!</br></br>Watch out, heroes! Recon has picked up a huge beast headed your way. With the agility and speed of a gorilla and armed with what look like elephant tusks, Raw-Jaw is going to take some power to stop! Look out for the corrupted quaza spike on his back!</br></br>* Features elephant tusks and corrupted quaza spike</br>* Fight off the heroes with lethal elephant tusks!</br>* Stands over 6” (16cm) tallephant tusks!
Theme
Hero Factory +
Title
Raw-Jaw +
Type
Set +
USPrice
$12.99 +
Advertisement