Brickipedia
Register
Don't have an account?
Sign In
in: Class 3 articles, Sets listed for ages 9 - 16, Hero Factory,
and 3 more
English

2235 Fire Lord is a Hero Factory set that was released in January 2011. It includes 125 pieces, and it is intended for children ages nine through sixteen.

Fire Lord is composed of 125 pieces. Its head features a double-sided mask revealing the mouth and two thorns mounted on the right and left side. The body features four universal turning systems to lock in the arms and legs. Its right arm wields a dual-sided weapon with a shell attached to the back for protection. Its left arm carries a meteor blaster with a launchable red marbled light orange fire sphere.

Once Fire Lord was a Mining bot on Tallos 5, but his thirst for power drove him to find more and bigger sources of energy.[1] He obtained the technical specifications for William Furno's Dual Fire Shooter, and decided to improve the design.[2] Based on a modified tungsten/cobalt blade design inspired by Furno's shooter, he added a heat induction core that not only fires coils of plasma, it can also siphon fuel and energy from whatever it touches.[2] By plunging the blades into a fuel pod, Fire Lord is able to suck out the fuel and use it for his own plans.[2]

The blades are very sharp, enough to cut through steel without slowing down.[2]

Fire Lord's ambition is simple: after upgrading himself to absorb fuel through his hands, he went insane and attempted to control all the fuel in the galaxy. 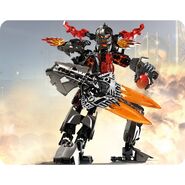 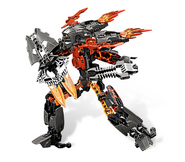 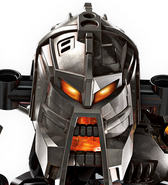 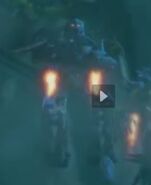 $29.99 +
Released
January 2011 +
ShopDescription
Lead your army of villains to steal the … Lead your army of villains to steal the hero-pod fuel!</br></br>Code red alert! Fire Lord, the evil leader of the fire villains, is breaking into Tanker Station 22. He and his band of hot heads are stealing hero-pod fuel to power their weapons. Watch out for his lava sphere shooter and lava flame thrower. His lava armour is nearly impossible to penetrate. Be extremely careful with this one!</br>* Scare the heroes with arm-mounted lava blaster and hand-held lava sphere shooter!</br>* Navigate lava flows with ease using tripod feet!</br>* Heavily armored with articulated claw lava armor and mechanical, flaming shoulder plates!</br>* Stands over 10” (26cm) tall!der plates!
Theme
Hero Factory +
Title
Fire Lord +
Type
Set +
USPrice
$19.99 +