Brickipedia
Register
Don't have an account?
Sign In
Advertisement
in: Class 3 articles, Sets listed for ages 9 - 16, 2011 sets,
and 3 more
English

2236 Scorpio is a Hero Factory villain set that was released in the second wave of July 2011. The set contains 104 pieces.

Scorpio appears to resemble a scorpion, the primary colours being black and lime with red details. He comes with the same helmet as 2231 Waspix, but in lime green. He carries two translucent corrupted quaza spikes.

Scorpio live on the jungle planet Quatros. They are very rare, like most of the planet's wildlife and are considered an endangered species. Fairly large and highly intelligent due to the planet's quaza, they are dangerous enough to possibly kill a hero. Scorpio are able to strike with their stinger tail, but prefer to stun their prey with their ball shooter on their tail from the distance to defeat it easily. They carry heavy armour plates with spikes to protect them from other predators of the planet.[1]

Witch Doctor was able to fit a Scorpio with two corrupted Quaza Spikes, now being able to control the creature. It was later freed by the heroes, and proceeded to attack the Witch Doctor for revenge, proving a powerful opponent. 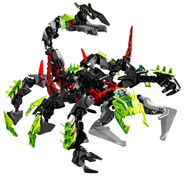 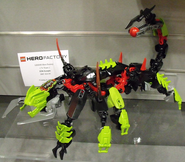