Brickipedia
Register
Don't have an account?
Sign In
Advertisement
in: Class 2 articles, Sets listed for ages 9 - 16, 2011 sets,
and 4 more
English

2282 Rocka XL is a Hero Factory set released in July 2011. It contains 174 pieces to build a Titan-sized depiction of 2143 Rocka 3.0, and is intended for fans ages nine through sixteen.

The second variant of Rocka, Rocka XL is the first Hero in XL form to be released. His colour scheme consists of black, golden, and silver, and he sports a white head and core, as well as a helmet like the head of a lion. Rocka XL wears two Savage Planet armour badges, one on each upper arm. In his right hand, he holds a plasma gun with a golden sphere; his left hand has been converted into a huge paw with four silver Quaza Spikes as claws. Two shield pieces like Stringer's claw-hand sit on his shoulders, similar to Green Lantern's, and spikes connect to those bricks. A few other spikes lie here and there around his shoulders. The leg build of Rocka XL resembles that of Fire Lord from the Ordeal of Fire subtheme, but as new pieces were introduced for Savage Planet, upgrades were made. Instead of just armour pieces for the toes, like that of Fire Lord, extra pieces connect to the two holes in the armour, making the feet look more advanced. Rocka XL's lower leg armour is made up of body armour pieces, four in number and black/dark silver in colour. Spikes connect to the outside pieces, and a silver Quaza Spike goes on the back of each foot. Rocka's legs are double-thick, due to the second limb brick connected to the first, but this goes for the lower legs and the lower part of the upper legs only. The set bears a resemblance to Rocka 3.0, as his XL mode retains a claw for one hand, but in a larger scale, which is what the XL part is all about. Interestingly, the claw is on the opposite side from the one in his smaller 3.0 counterpart. XL stands for Extra Large.

The hero Rocka XL was created to stop Witch Doctor from draining the jungle planet Quatros of its Quaza.[1] During the Hero's final battle with Witch Doctor, they realize that Witch Doctor can't be stopped. In a desperate attempt to defeat him, Furno finds spare hero parts and builds Rocka XL enabling Rocka to have a chance to defeat Witch Doctor. 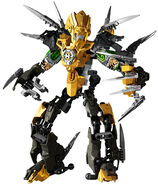 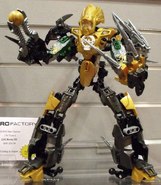 €24.99 +
Released
2011 +
ShopDescription
Defeat Witch Doctor and end his rule ov … Defeat Witch Doctor and end his rule over the beasts!</br></br>Rocka is the only hope for saving Quatros! All of the other heroes are busy holding off Witch Doctor’s beasts and they are starting to run low on energy. Only Rocka has enough power to stop Witch Doctor before he drains jungle planet Quatros of its Quaza. Blast into battle and save the planet from certain destruction!</br></br>* Features double blade claw combo tool!</br>* Equipped with lion animal power!</br>* Rocka’s specialties are speed, strength and ferocity!</br>* Measures over 11” (29cm) long!ferocity!
Theme
Hero Factory +
Title
Rocka XL +
Type
Set +
USPrice
$24.99 +
Advertisement