23 Delivery Truck Set was a Minitalia set released in 1971. It contained 64 pieces.

This set consisted of parts the majority of which was produced in Italy and were different to LEGO parts in several ways. The plastic used to produce these bricks was not ABS plastic and the resulting bricks were not as bright in colour as LEGO Acrylonitrile Butadiene Styrene parts. There was no LEGO text on the top of studs as most were hollow like Technic bricks. The tubing system LEGO uses to couple bricks was changed to an x type system. Other more complex types of bricks used were manufactured by LEGO such as the towball and sockets, fence parts and boat hulls. Minitalia was produced in Italy much the same as Samsonite was produced in the USA. The idea behind this was to somewhat avoid difficult importing laws in Italy. 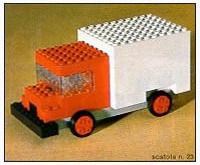 Retrieved from "https://brickipedia.fandom.com/wiki/23_Delivery_Truck_Set?oldid=1533880"
Community content is available under CC-BY-SA unless otherwise noted.