Brickipedia
Register
Don't have an account?
Sign In
Advertisement
in: Class 4 articles, Sets listed for ages 8 - 14, Ninjago,
and 3 more
English

2505 Garmadon's Dark Fortress is a 518 piece Ninjago set that was released in 2011. The set contains a fortress made mainly out of black, grey, purple, and white pieces, with some red, has a brown drawbridge, and is armed with flick-fire missiles. It also includes Lord Garmadon's throne which doubles as a flying machine and a giant skeletal underworld spider that attaches to the fortress. Other minifigures include Kai, Nya, Samukai, Chopov, and Bonezai. Their names were mixed up in the January 2011 catalog. 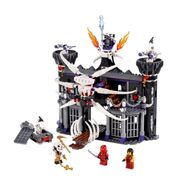 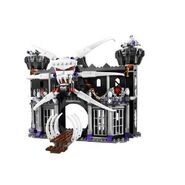 On the Spring 2011 catalog mistakes were made on the naming of minifigures. Samukai and Chopov also had their torsos switched

x12px $129.99 +
Released
January 2011 +
ShopDescription
Battle for the weapons of spinjitzu at … Battle for the weapons of spinjitzu at Garmadon’s Dark Fortress!</br></br>Samukai has taken 3 of the golden weapons back to Garmadon’s underworld lair and it’s up to Kai and Nya to get them back. Before they battle their evil skeleton enemies, they need to get past the castle’s defenses including flick-fire missiles and a massive spider! Let this epic battle between good and evil commence! Set includes 6 minifigures and 5 weapons.</br>* Includes 6 minifigures: Kai, Nya, Garmadon, Samukai, Bonezai and Chopov</br>* Features 5 weapons: shurikens of ice, golden scythe, nunchucks of lightening, black sword and silver sword</br>* Garmadon’s Dark Fortress features ejecting spider and grave, missiles, tower prisons and moving throne</br>* Spin the towers!</br>* Flick-fire the wall-mounted missiles!</br>* Launch the spider to attack!</br>* Garmadon’s Dark Fortress is over 10” (25cm) tall and 11” (28cm) wides over 10” (25cm) tall and 11” (28cm) wide +
Theme
Ninjago +
Title
Garmadon's Dark Fortress +
Txt1
Kai +
Txt2
Nya +
Txt3
Bonezai +
Txt4
Chopov +
Txt5
Lord Garmadon +
Txt6
Samukai +
Type
Set +
USPrice
$69.99 +
Advertisement