2520 Ninjago Battle Arena is a Limited Edition 463 piece Ninjago set that was released in January 2011. It includes two Minifigures, Cole in his DX version and Bonezai. 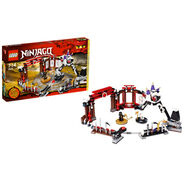 The box and entire set

The minifigures
Add a photo to this gallery