Brickipedia
Register
Don't have an account?
Sign In
Advertisement
in: Class 3 articles, Sets listed for ages 8-14, Ninjago,
and 3 more
English

The Skull Chopper is piloted by Frakjaw. It has 4 flick-fire missiles at the sides with a skeleton headpiece for the top part of the missile. The front of the Helicopter has a face of a skeleton, a design that looks something like the face on the 2263 Turbo Shredder and the 2259 Skull Motorbike, but not exactly. It is more like Samukai. It has four blades at the top which rotate. There is also a short fire piece (not a big one like the other mobile sets like the 2263 Turbo Shredder and the 2259 Skull Motorbike). The main feature of the Helicopter is that at the bottom, is a cage to trap Sensei Wu. There is a rope piece connected to the cage, to the back of the Helicopter, probably to pull him up. Also, the jaws of the Samukai-like head snap open and closed, and the cockpit can open by lifting the "forehead". 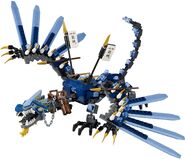 The Skull Chopper's behind