258 Zoo with Baseboard is a Building Set with People set released in 1976. It contains 473 pieces including six Homemaker Figures, and a 61 x 70 stud, cardboard baseplate to build the Zoo upon. 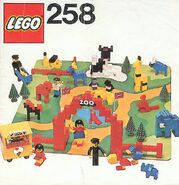 Instructions cover.
Add a photo to this gallery

Retrieved from "https://brickipedia.fandom.com/wiki/258_Zoo_with_Baseboard?oldid=1364855"
Community content is available under CC-BY-SA unless otherwise noted.