Brickipedia
Register
Don't have an account?
Sign In
Advertisement
in: Class 4 articles, Sets listed for ages 5–12, 1997 sets,
and 4 more

2846 Indian Kayak is an Indians promotional set released in 1997. Specifically, it was a promotional release with Blockbuster Video, UK (1997) and Little Chef, UK (1998). It contains 18 pieces to construct an Indian and his kayak.

The Indian is the typical tan-shirted minifigure seen in several sets in the line. He carries an oar and a bow and arrow for hunting and fighting with, and wears a quiver on his back. The kayak is made of simple elements and is equipped with an axe and spear. 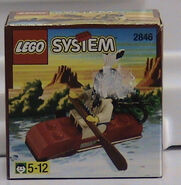