Brickipedia
Register
Don't have an account?
Sign In
Advertisement
in: Class 2 articles, Sets listed for ages 2 - 6, Winnie the Pooh,
and 3 more 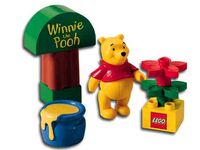 This very small set, with only eight pieces, is one of LEGO's smallest sets. It consists of a small pole (made out of two bricks) which has another brick attached to the top of it, bearing the words "Winnie the Pooh". The set also contains a large flower (created by stacking two normal DUPLO flowers on top of each other), Winnie the Pooh, and a pot of honey.

Pooh's corner is, in the Winnie the Pooh novels, a place were Pooh would come to relax and think.