Brickipedia
Register
Don't have an account?
Sign In
Advertisement
in: Class 3 articles, Sets listed for ages 5-12, Castle,
and 6 more

30062 Target Practice is a Kingdoms promotional set that was released in the United States at LEGOLAND California (in mid-2010) and Target retail stores (in December 2010). It includes a Crossbow Lion Knight, two green apples and a turkey leg.

The set includes a tree that has a bottle and two sloping bricks as a base. There is also a bigger sloping brick as the trunk, along with a brown bottle. The leaves have two apples on it, along with a green Part 4589 The base that the tree is on, also includes a target. There are two brown telescopes with a flip on them. On that is a target. The set also includes a box with two spears in it, and a campfire with a turkey leg. 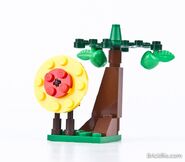 The target and tree