Brickipedia
Register
Don't have an account?
Sign In
in: Class 3 articles, Sets listed for ages 6-12, Galaxy Squad,
and 2 more
English

30230 Mini Mech is a 28 piece Galaxy Squad polybag set released in 2013, which started to show up in Walmart stores in the United States in February 2013, and Target stores in September-October 2013.

The mech is made up of mainly white, with flashes of orange and dark grey. The bottom of the mech is made up of a 2x2 circular transparent-white piece connected to a black parabolic ring that supports the four legs. The legs are made up of two pieces, a robot arm and a transparent orange globe. A turntable piece is placed above the ring, connecting to the seat. The seat area is white, with a handle bar coming out of the bottom of it for the figure to hold onto. The back of the seat piece includes the gun, which is made of a white inverted roof tile placed on the upper area and an orange 2x2 piece with a new flat inverted tile to give it a sleek look. On both of the remaining studs of the inverted roof piece are two transprent yellow cones, which serve as the weaponry for the mech.

The mini-mech is a known vehicle of the Orange Division of the Galaxy Squad, with its pilot, Jack Fireblade. 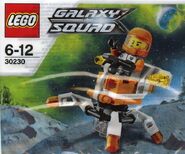 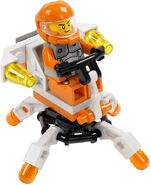