Mushrooms, also known as Sub-space Mushrooms or Subspace Mushrooms, add an additional mark or heart to the life meter, up to four. Additionally, the Mushrooms also turn Mario, Luigi, Peach, and Toad back into their Super forms if they are in their Small forms in the same manner as a Super Mushroom or a small heart, and the health meter is refilled upon collection. In the original Super Mario Bros games, the mushrooms were found in special zones called "Subspace." In later games it was made easier to get mushrooms. In the modern game, mushrooms are frequently found in Question Blocks, and can be obtained when a character jumps and hits the box from below or ground pounds it from above. If the character is in their Super form already, it gives them extra points. 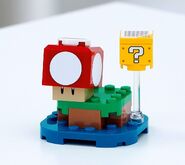