Brickipedia
Register
Don't have an account?
Sign In
Advertisement
in: Class 2 articles, Sets listed for ages 6+, 2021 sets,
and 3 more
English

30389 Fuzzy & Mushroom Platform Expansion Set is a Super Mario polybag that was released on August 1, 2021.

Fuzzies, also called Fuzzles, are small, black-furred creatures with unusual, spiky bodies. They possess two strabismus eyes and large teeth. Despite displaying some level of intelligence and the ability to speak, Fuzzies are, for the most part, erratic creatures.

Fuzzies first appear in Super Mario World as particularly rare enemies that cannot be defeated, found circling blocks or the wire-like constructs floating in mid-air. They first appear in the same level where ON/OFF Switches first appear, Donut Plains 3. Fuzzies do not directly attack Mario or Luigi and only do damage if their paths happen to intersect. The ones circling around blocks can be defeated, either by Yoshi or by tossing (or kicking) a Koopa Shell at them. Fuzzies are among the few enemies not shown during the game's end credits. 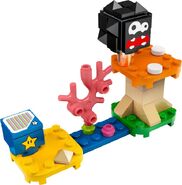