Brickipedia
Register
Don't have an account?
Sign In
Advertisement
in: Class 2 articles, Sets listed for ages 5 - 12, Adventurers Egypt,
and 6 more

3055 Adventurers Car is a LEGO Adventurers Egypt set that was released in 1998. The set was originally released as a Kellogg's promotional set, often coming as an addition to a cereal packet. However the set could also be purchased separately with a box and instructions. The set includes a Johnny Thunder minifigure and a very small black and grey car.

The car has a standard Adventurers headlight piece which is a rounded piece a few bricks high with a grill imprinted in the front and two round headlight jutting out at the side. Behind the headlights the engine below it slopes downwards, represented by a black slope, and a steering wheel is behind that. Johnny sits behind the wheel and a short wall piece is placed on the back to keep him in place. On the bottom of the car there are are two pairs of small black wheels; one in the front and one in the back. The whole car only measures seven studs in length and is two studs wide, not counting overhang caused the the wheels and headlights. 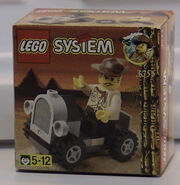 The set built with its instructions next to it