Brickipedia
Register
Don't have an account?
Sign In
Advertisement
in: Class 2 articles, Sets listed for ages 6+, Creator,
and 2 more
English

The polybag is made of 62 pieces, which make three minibuilds. The main build is a pelican, which has orange parts for feet, white parts for the body, hinges for wings, eye-tiles for eyes, and the beak is made of six 1x2x2/3 Yellowish Orange plates with bows, as well as a 2x3x2 Yellowish Orange cupboard. There is also a dock for the Pelican to land on, which is made of two Bright Blue 45 degree 3x3 corner plates as the water, and multiple brown pieces as the dock.

The second build is a tropical bird, with orange pieces for the feet and white pieces as the body of the bird. The head uses white pieces and the same eye-tiles. A Yellowish Orange plate with bow and a Bright Yellow 1x1 hinge plate serve as the plume of the bird. The wings are made of the Blue corner plates, a White 2x2 45 degree corner plate, and a Yellowish Orange 1x2 plate on each side.

The third build is a rabbit in the sitting position. The body is made of white pieces with orange and tan outer pieces, and the arms are made of hinges attached to Yellowish Orange plates with bows and 2x2 white round plates. The head is made of white pieces and eye-tiles, with Tan 1x1 slanted roof tiles as the teeth. The ears are the same plate with bow/hinge plate combo as the bird. 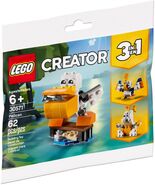 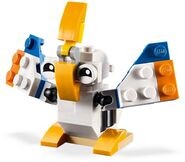 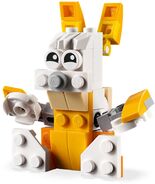