Brickipedia
Register
Don't have an account?
Sign In
Advertisement
in: Class 2 articles, Sets listed for ages 6+, 2019 sets,
and 3 more
English

The polybag is made of red, white, and blue pieces. The bottom skirting are made up of red pieces, and the front bumper has two red pieces and one blue piece. Across the hood to the roof has red with a thin layer of blue, and moving down the roof is another layer of red. The vent at the front is also blue, as well as the hood. There are black 1x1 slanted roof tiles as the windshield, topped by red pieces and a middle single blue piece. There are small engine details exposed behind the windshield formed by 1x1 dot tiles, and the rear spoiler propped with a black hinge and a blue 1x4 modular piece. At the rear is a simple exhaust layout at the center, formed by 1x1 black dot tiles.

There are three blue 1x4 modular tile pieces used in the Creator modular lineup in this set. 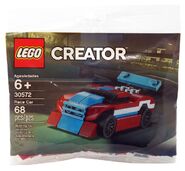