Brickipedia
Register
Don't have an account?
Sign In
Advertisement
in: Class 2 articles, Sets listed for ages 6+, 2019 sets,
and 3 more
English

The set has 67 pieces, which are used to build a Santa Claus figure, small gift, table, and a toy train. The small gift is made of two Dark Green 2x2 plates with knobs, with one Red 2x2 plate with knob in the middle. There is a gold stud on the top.

The toy train and table are made of brown, transparent, black, and light blue figures. The table has black 1x2 plates for feet, and 1x2 Sand Yellow Palisade bricks as the legs. The table itself is a 2x4 Sand Yellow plate. The train has black 1x2 plates on the bottom, topped by 1x1 Black slanted roof tiles as the nose of the engine and 1x2 and 1x2 light blue plates as the body of the train, with a 1x1 transparent plate as the windshield and another 1x1 light blue plate as the top. The whistle is made of a Black 1x1 small nose cone. 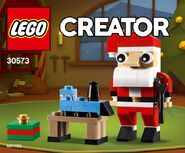