Brickipedia
Register
Don't have an account?
Sign In
Advertisement
in: Class 4 articles, Sets listed for ages 6+, 2020 sets,
and 6 more

The polybag is composed of 70 pieces, building one tree and two accessories. The tree is built from a 3 x 3 Dark Green plate with four Dark Green tree limbs extending diagonally at each end, with another plate on top of those limbs, thus forming a "sandwich" of plates with limbs between them. In the middle of the top plate is a Bright Red stud, and four 1 x 3 Earth Green plates extend in each direction from that stud, sticking out. Attached to the other end of each limb is four studs (two Bright Yellowish Green, one Bright Blue, one Bright Orange), and attached to the underside of the bottom plate is four Dark Green 1 x 3 roof tiles pointing outwards. Attached to the top of the end of those tiles is a stud (one Transparent Blue, two Bright Red, one Medium Lilac), with a Medium Stone Gray 1 x 1 nose cone in the very middle of the build. Pointing outwards from that is another four 1 x 3 roof tiles, with yet another plate on top of that. A Black 3 x 3 cross is placed on that plate, and four Black rounded 1 x 2 plates with studs on top (two Bright Blue, two Medium Lilac) are attached to the corners, pointing diagonally outwards. On top of that cross is another nose cone, with another four roof tiles pointing outwards, and another cross on top. Four studs are attached to the end again (two Bright Orange, one Bright Red, one Bright Yellowish Green), and four 1 x 1 Dark Green roof tiles are placed at each end of the cross, pointing inwards. A White stud is placed in the middle of the cross, topped by a Bright Red stud and Dark Green 1 x 1 nose cone. A Transparent Fluorescent Green magic wand is placed in the middle of that, and a 4 x 4 Bright Red plate with a 2 x 2 Black plate with snap and Black rotor are attached to the bottom of the tree. 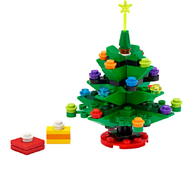