The set features a brick-built R2-D2. The top printing is similar to the minifigure, but the torso is less detailed, instead relying on vent pieces for the printing. The build is larger than the normal minifigure, and the set is made of full parts.

R2-D2, pronounced Artoo-Deetoo and often referred to as Artoo, was an R2-series astromech droid manufactured by Industrial Automaton prior to 32 BBY. Resourceful and spunky, the droid developed an adventurous personality during his many decades of operation. Inside of his cylindrical frame were many arms, sensors, and other tools that could be extended to fulfill various needs, such as slicing computers, extinguishing fires, projecting holograms, repairing starships, and flying. Along with his counterpart, the protocol droid C-3PO, R2-D2 constantly found himself directly involved in pivotal moments of galactic history. His bravery, coupled with his many gadgets, played large roles in saving the galaxy time and time again for more than a century. Like other astromech droids, R2-D2 could walk on two legs or use a third leg to roll across the ground.

In 32 BBY, R2-D2 was serving the Royal Engineers of Naboo aboard Queen Padmé Amidala's royal starship when the Trade Federation blockaded the planet. His maintenance work on the ship's hull while it was under fire allowed the queen and her crew to bypass the blockade and flee the sieged world. R2-D2 was then recognized before the queen for his work in ensuring the ship's safety. Afterwards, R2-D2 directly served the queen, playing a decisive role in liberating Naboo and remaining with Amidala for another ten years, even as she transitioned to the role of senator eight years later. When attempts on her life were made in 22 BBY and the Jedi Padawan Anakin Skywalker was assigned to protect her, R2-D2 and C-3PO accompanied the two to Geonosis and participated in a battle that started the Clone Wars, a galaxy-wide conflict between the Galactic Republic and the Separatist Confederacy of Independent Systems. Amidala gave R2-D2 to Skywalker when he became a Jedi Knight, and the astromech droid faithfully served him throughout the war, often flying in the droid socket of Skywalker's starfighter or fighting next to him on the front lines.

The war was in fact orchestrated by the Republic's Supreme Chancellor Palpatine, who was secretly the Sith Lord Darth Sidious, and who brought the conflict to an end three years in, taking Skywalker as his Sith apprentice, wiping out the Jedi, and reorganizing the Republic into a Galactic Empire. In the aftermath of the war, R2-D2 and C-3PO were assigned to the corvette Tantive IV of Alderaan, where they served Alderaan's viceroy Bail Organa for nineteen years. They were, however, separated from Organa during that time period, and got caught up in a wide variety of misadventures, ruining the gangster Tig Fromm, helping restore the Tammuz-an monarchy, and aiding the merchant Mungo Baobab in reviving his family's fortune, among other exploits. After rejoining the crew of the Tantive IV, they became embroiled in the Galactic Civil War, and in 0 BBY, Leia Organa of the Rebel Alliance entrusted R2-D2 to bring a copy of the Death Star plans to the Jedi Master Obi-Wan Kenobi on Tatooine. After meeting Skywalker's son Luke Skywalker and the smuggler Han Solo, the droids helped rescue Princess Leia from the Empire's Death Star and became directly attached to the three Humans, helping them and their rebellion defeat the Empire and restore freedom to the galaxy. R2-D2 also assisted Luke in his training as the galaxy's last Jedi Knight.

When the Rebellion later became a New Republic, R2-D2 continued to serve Luke and the now-married Han and Leia Solo, helping them defeat remnants of the Empire; R2-D2 notably sliced into Palpatine's Galaxy Gun and used it to destroy the Emperor's fortress world of Byss, teamed up with C-3PO and a young mechanic named Cole Fardreamer to foil a plan to bomb the galactic capital of Coruscant, and recovered a copy of the Caamas Document, which allowed peace to be forged between the New Republic and the final remnants of the Empire. When an extra-galactic race of religious zealots known as the Yuuzhan Vong invaded the galaxy in 25 ABY, R2-D2 participated in the four-year conflict that eventually saw the invaders defeated. Six years later, Luke and Leia discovered the identity of their mother via holorecordings found inside of R2-D2's memory, and R2-D2 remained at their side during the subsequent Second Galactic Civil War. The astromech droid was passed down to many subsequent generations of Skywalkers, and in 137 ABY, aided Cade Skywalker in fighting against a revived Sith Empire. 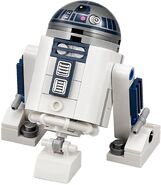