The set has 157 pieces, used to make three different builds. The main build is a supersonic futuristic jet plane, which has red and white pieces and forward swept wings, with a tinted cockpit and a jet engine at the end with a fire piece at the end. The nose of the plane is made of gray and white pieces. There is also fixed landing gear.

The second build is a spaceship, with two protruding wings on each side. The wings are white on top with gray pieces underneath. The wings are red and the main body of the plane is red and white in a semi-checkered pattern. There are two fire pieces on each side. There is a large dark gray hub piece, with the gray nose sticking out from behind it.

The third build is a robot made of predominantly red and gray pieces. The main body is red, the legs are white and gray, and the arms are red and white with gray hands. The back has two diagonal wings. 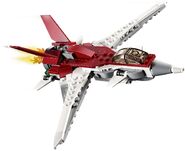 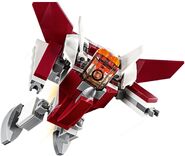 Back box art
Add a photo to this gallery

Retrieved from "https://brickipedia.fandom.com/wiki/31086_Futuristic_Flyer?oldid=1973392"
Community content is available under CC-BY-SA unless otherwise noted.