Brickipedia
Register
Don't have an account?
Sign In
Advertisement
in: Class 1 articles, Sets listed for ages 6+, 2019 sets,
and 4 more
English

The set uses 147 pieces to build three builds. The first build is a dune buggy, which has blue sides and a partly blue hood. The bumper is black, and there are four headlights made of translucent studs. Parts of the side are yellow, and the main part of the hood is a white piece. The rear spoiler is blue with yellow and black pieces and a white piece down the middle. The car carriage is capable of fitting one minifigure, and the engine is behind the carriage.

The second build is a plane. The plane has its engines directly behind the propellers, which is made of a gray piece. The bottom, part of the nose, tip of the wings and part of the sides are yellow. The middle, wing, and main portion of the plane body is blue. The cockpit cannot fit a minifigure, and there is a large white bit directly behind it.

The third build is a quad bike. The bottom of the bike is black and gray, but the front is blue with yellow sides. The top also has yellow pieces. The piece behind the handlebar is white, and the pieces in the back are blue. 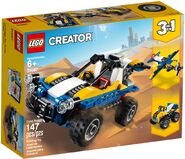 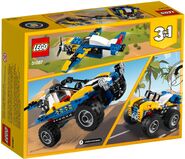