The set consists of 221 pieces, which are used to create three different builds. The first and main build is a standard race car (Sunset Track Racer), which is made of a predominantly white body, orange underside and hood, and blue highlights. There is a translucent windshield, and the headlights are made of 1x1 slanted roof tiles.

The second part of the set is the "Classic Race Car," which is a roadster with a significantly different color scheme. The body is still predominantly white, but there is no rear spoiler. The front is now almost completely white, with orange on the side. The translucent windshield is now much more visible, as is the steering wheel. The sides are orange to a point, and then the rest is dark blue with a more exposed engine. The exhaust is made of a black binocular piece and translucent red 1x1 slanted roof tiles.

The third part of the set is not a car, but a speedboat (resembling a landspeeder from Star Wars). The bottom is dark blue, and the sides are white and orange, with the blue being exposed in the back. The main hull is orange and white, and the seating area has the windshield, but is now mainly blue instead of white or orange. The engine is now completely exposed, and there is somewhat of a dark blue rear spoiler. 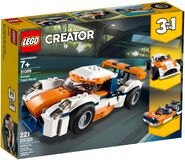 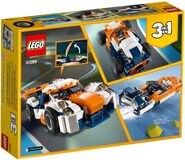 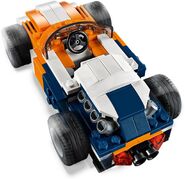 roadster
Add a photo to this gallery

Retrieved from "https://brickipedia.fandom.com/wiki/31089_Sunset_Track_Racer?oldid=1973387"
Community content is available under CC-BY-SA unless otherwise noted.