Brickipedia
Register
Don't have an account?
Sign In
Advertisement
in: Class 3 articles, Sets listed for ages 8+, Creator,
and 3 more
English

The set is made of 594 pieces, which are used to create 3 different builds. The main build has a large build, and two smaller builds. One of the smaller builds is an ice cream cart. There are four different scoops of ice cream, and the roof is brown. It is not a full stand, but a push-cart with black handles and black wheels. The second build is a ticket stand. The stand is on a green baseplate, with a bowl of red flowers on the side. The ticket stand is made of blue and yellow pieces with a white roof and a sign that says "tickets" in the middle. The main build is a large UFO-themed attraction. The attraction is a spinner with three different carriages - a cow made of black and white pieces, a classic spaceship made of red and white pieces, and a more high-tech spaceship made of white pieces and an orange windshield.

The second build is a tower drop attraction, with a tower made of Technic pieces that allows the car to move up and down. The build is on an ovular green baseplate, and the classic spaceship from the first build is used as decoration on top. There is an ice cream stand to the right, but it is fully built and has an ice cream sign. To the left is the ticket stand, re-purposed as a hit-the-target mini-game.

The third build is a sideways spinner ride, with four different cars connected by technic pieces to a gyroscopic spinning machine, which can be turned due to the Technic elements. It is on the same ovular green baseplate, and there is a different green baseplate with the bowl of roses, a turnstile, and a ticket booth with no roof. 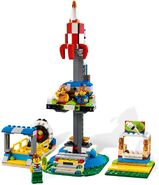