Brickipedia
Register
Don't have an account?
Sign In
Advertisement
in: Class 2 articles, Sets listed for ages 6+, Creator,
and 4 more
English

The set contains 128 pieces, which can be used to build a propeller plane, helicopter, or a jet aircraft. The propeller plane, which is the main build, is built from a variety of pieces, with the planes being predominantly Earth Blue colored on the side and Dark Azur on the top and wings, with Bright Orange tips and highlights. The plane has a White tail and the cockpit pieces are Black, as they are on the other two builds. There is a Bright Red nose and the propellers are Black.

The helicopter is a smaller and more narrow build, with a very exposed Medium Stone Gray body with Earth Blue sides and a cockpit that is more of a surrounding cockpit, as opposed to the mostly flat cockpits of the other two builds. The rotor is the same as the propeller plane, but this time with a Medium Stone Gray brick at the end. The helicopter also has a landing pad, which is made from Bright Orange bricks and surrounded by Dark Azur pieces and Dark Stone Gray studs.

The jet aircraft is very similar to the propeller plane in color, except that the body is made of Bright Orange pieces and barely exposed, with White wings and a Dark Azur top, with Earth Blue tailfins. It is the only one of the builds not to use propeller pieces. 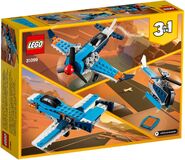 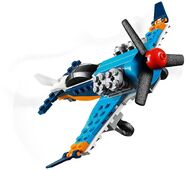