Brickipedia
Register
Don't have an account?
Sign In
Advertisement
in: Class 2 articles, Sets listed for ages 7+, Creator,
and 3 more
English

The set has 234 pieces, which can be used to build three different builds: a dragon, a scorpion, or a saber-toothed tiger. The dragon's body is built from New Dark Red and Bright Red, with Bright Yellow undertones and jaw and Earth Blue wings. The tail contains all four colors as well as Medium Stone Grey joint pieces, and there is a Black chest with various accessories.

The second build is a scorpion, which has a tail built from New Dark Red and Black bricks and connected to the scorpion body with Dark Stone Gray joint pieces. The top of the scorpion is New Dark Red, with a Bright Yellow underbelly and Bright Yellow legs. The scorpion's claws are made of the Earth Blue pieces, and a White tooth piece is used as the stinger. 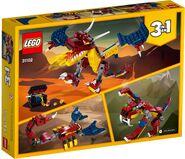 $29.99 +
Released
January 2, 2020 +
ShopDescription
Boost kids’ love of awesome creatures and … Boost kids’ love of awesome creatures and their creativity with the LEGO® Creator 3in1 Fire Dragon (31102) set. Children love playing with this fearsome, fire-breathing dragon toy with posable head, jaw, legs, tail, wings and claws, plus an opening treasure chest with assorted elements. Build-and-play freedom Kids get the joy and fun of 3 different build-and-play experiences in 1 with this LEGO Creator 3in1 set. They can build a fire dragon and then rebuild it into a saber-toothed tiger with posable limbs, head and jaw, a Scorpion with posable legs and claws, or dream up something completely new. This building toy encourages imaginative play and makes a great all-occasion gift for kids. Well-known models based in fantasy and reality LEGO Creator 3in1 sets offer kids toys that are wonderfully detailed, tap into different passion points and spark imaginative play. The models offer endless building and play opportunities while helping to drive creativity in children of all ages.</br>*Support kids’ imaginative role play with this exciting set, featuring 3 models in 1: A fire dragon, a saber-toothed tiger and a scorpion. It makes a great gift for kids as building and rebuilding extends the play endlessly!</br>*Who dares face these creatures? Kids can stretch their building skills as they fly with a fire dragon, face a saber-toothed tiger, dodge a scorpion strike or let their creativity loose and build whatever they like.</br>*3 building options in 1. This set develops building skills as kids make a Creator 3in1 Fire Dragon (31102), saber-toothed tiger or a scorpion. The models can be played with solo or combined with other LEGO® sets.</br>*Fans of creative building will love this cool set. The red, blue and yellow fire dragon, stealthy saber-toothed tiger and sleek scorpion make a great Christmas, birthday or anytime gift for boys and girls aged 7 and up.</br>*Posable and ready for adventure! With the Fire Dragon measuring over 4” (11cm) high, 12” (32cm) long and 9” (25cm) wide, this incredible animal action toy is big enough for playing out serious fantasy stories!</br>*Powered by a child’s imagination for hours of endless fun! Battery-free toys help boost kids’ independent play and problem-solving skills and give them the joy of coming up with new stories all on their own.</br>*Open the box and the creative play begins with building and rebuilding any 1 of the 3 model toys. Easy-to-follow instructions help make assembly a snap for kids, leading to pride in creating and loads of fun.</br>*Give youngsters endless possibilities to play with LEGO® Creator 3in1 sets. This cool animal building toy lets kids grow their creativity and building skills as they develop new stories with each rebuild.</br>*LEGO® bricks meet the highest industry standards, so they are consistent, compatible and connect and come apart easily every time – it's been that way since 1958.</br>*At The LEGO Group, we drop, squash, twist, heat, bite, bend, scratch and stretch LEGO® bricks and pieces to make sure every kids’ building toy meets the highest global safety and quality standards.ghest global safety and quality standards.
Theme
Creator +
Title
Fire Dragon +
Type
Set +
USPrice
$19.99 +
Advertisement