Brickipedia
Register
Don't have an account?
Sign In
Advertisement
in: Class 1 articles, Sets listed for ages 9+, Creator,
and 4 more
English

As a Creator 3in1 set, 31120 Medieval Castle contains instructions for building three different models: the eponymous Medieval Castle, a Castle Tower, or a Medieval Marketplace. Each model is designed to connect to one another, allowing for a greater layout with multiple copies of the set.

The Medieval Castle is a two-floored castle, featuring an opening gate, smithy, water mill, prison, and king's room. Hinges allow the castle to fold open. It measures over 10.5 inches (26 cm) high, 12 inches (31 cm) wide, and 11 inches (28 cm) deep. The model also comes with brick-built animals, including three chickens, a rat, a falcon, and a fire-breathing dragon.

The Castle Tower is five stories tall, with a prison serving as the bottom floor. The tower connects to a bridge crossing a body of water. This model also comes with a working trebuchet.

The Medieval Marketplace includes two shops for food and armor, a tree with an archery target and two birds, a windmill, and a guard tower with a prison.

Four minifigures are included, including a Blacksmith and the 2013 skeleton. The remaining two minifigures, referred to as Medieval Guards in the product description, are Black Falcon Knights using the same updated torsos and printed legs previously seen in 21325 Medieval Blacksmith; the set also references the Black Falcons theme through their emblem printed on shields. Additionally, a frog is included as the only animal that is not brick-built. 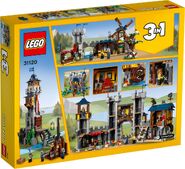