Brickipedia
Register
Don't have an account?
Sign In
Advertisement
in: Class 2 articles, Sets listed for ages 18+, 31000 sets,
and 2 more
English

The Marilyn Diptych (1962) is a silkscreen painting by American pop artist Andy Warhol depicting Marilyn Monroe. The piece is one of the artist's most noted works. It is in the collection of the Tate in the United Kingdom. The twenty-five images on the left are painted in color, the right side is black and white. The work was completed during the weeks after Marilyn Monroe's death in August 1962. The fifty images of the actress are all based on a single publicity photograph from the film Niagara. The painting consists of 50 images. In a December 2, 2004 article in The Guardian, the painting was named the third most influential piece of modern art in a survey of 500 artists, critics, and others. The artwork was also ranked ninth in the past 1000 years by Kathleen Davenport, Director, Rice University Art Gallery, Houston. The artwork was bought by art / design show organizer / collector Emily Hall Tremaine out of Warhol's studio in 1962, among several other noted early works by Warhol. This work was sold to the Tate Gallery in 1980. Over the years, Marilyn Diptych has been in numerous exhibitions, including Witty, Sexy, Gimmicky: Pop 1957-67 at the Tate museum. It is one of the most recognizable modern art pieces in history, and has been recreated and referenced many times in popular culture.

The set includes 3341 pieces, which are used to make a frame and photo of Marilyn Monroe. The frame is built from multiple Black bricks as a base with holes in the bottom, connected via Black TECHNIC connectors to the other bases, of which there are nine, each containing one portion of Marilyn Monroe's face. A massive amount of 1 x 1 circular tiles are used to build Monroe's iconic face, with seven colors each corresponding to a number. Black corresponds to 1, Dark Stone Gray corresponds to 2, Medium Azur corresponds to 3, Bright Yellow corresponds to 4, Light Purple corresponds to 5, Bright Purple corresponds to 6, and Bright Reddish Violet corresponds to 7. While the set is designed to be built with certain colors in mind, the correspondence of the colors can be switched around to form various shades of Marilyn Monroe's face, as seen below. The set can be framed and attached to a wall, and the instruction booklet is a useful coffee table book that includes descriptions of Andy Warhol's work. A 2 x 4 Black tile with Andy Warhol's signature is included, and a QR code is included in the booklet that connects to a series of soothing sounds relating to Andy Warhol that one can listen to when working. 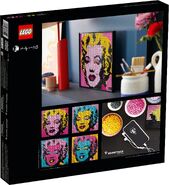 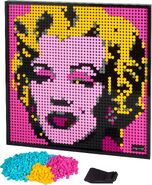 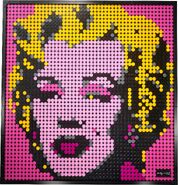 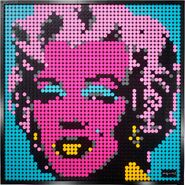 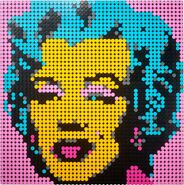 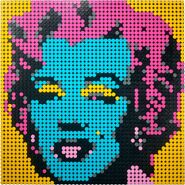