Brickipedia
Register
Don't have an account?
Sign In
Advertisement
in: Class 3 articles, Sets listed for ages 5-12, Friends,
and 4 more
English

In the summer of 2012, after the set was displayed at the Toy Fair, but before it was released, internet rumors began circulating that it was cancelled in the production stage for unknown reasons along with 3867 Maya Mystica.[1] A few days prior to the September 1st release date, the set began showing up on shelves at LEGO brand stores, putting the rumors to rest. The set is supposedly only going to have one production run, as well as just a single shipment to each LEGO Store, making it fairly rare.

Olivia and Christina have been friends since they were babies. They often spend the winter holidays together in a lodge at Clearsping Mountain and deliver presents and cards to their neighbors with a sled.[2] 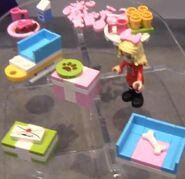 The inside of the box