Brickipedia
Register
Don't have an account?
Sign In
Advertisement
in: Class 3 articles, Sets listed for ages 5-12, City,
and 2 more
English

3367 Space Shuttle is a City Space set released in March 2011. The set includes a Space Shuttle, and an Astronaut with two different helmets.

The space shuttle has a detachable cockpit with space for one minifigure. The midsection features opening doors that conceal a manipulator arm and enough space to store the model of the Hubble Telescope included in the set. The back section contains three boosters and two thrusters, with transparent orange studs to mimic rocket exhaust. The underside has fixed landing gear, like the one used in the 2006 City Airport Collection. There are no booster rockets included in this set.

The Astronaut next to the shuttle. 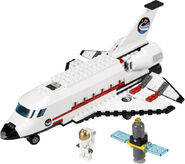