The set contains several builds, the main of which being the Fire Station itself, which consists of several rooms and a small clock tower. Also included are a fire engine and fire car with 4 generic firemen. 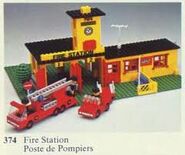 Retrieved from "https://brickipedia.fandom.com/wiki/374_Fire_Station?oldid=1967730"
Community content is available under CC-BY-SA unless otherwise noted.