3784 Hugo Hog is a Fabuland-themed set released in 1982. The set consists of five pieces, including a Fabuland Figure, Hugo Hog.

The set consists of Hugo Hog, a wheelbarrow, and its contents. Hugo has a black torso with yellow arms, and blue legs. The red wheelbarrow is shallow,and has large yellow wheels with studs mounted in their centres. In the wheelbarrow is a black cauldron, with an orange broomstick mounted in it. A red saucepan is set on top of the cauldron. 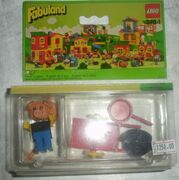