This article is about the LEGO Games set. For the Power Miners character, see Lava Monster.

3847 Magma Monster is a LEGO Games set that was released in 2010. It features a small underground section of lava with four microfigures and a constructed magma monster. In the US, the set is sold as a Special Edition set at the LEGO Retail Store and Wal-Mart. 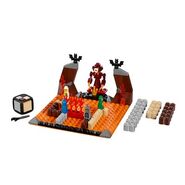 Be the f … Gametime’s getting hotter!</br></br>Be the first to build a path over the stream of molten lava, so you can battle the monster and take the ancient golden treasure. Block your opponents with the monster or wall of fire and slow them down with a clever bat attack. A game of strategy and luck for all ages for 2 to 4 players.</br></br>* 1 buildable LEGO Dice</br>* 4 LEGO microfigures</br>* 90 LEGO pieces</br>* 1 rule booklet</br>* 1 building instruction