384 London Bus is a LEGOLAND Vehicles set released in 1973. It contains 110 pieces to construct a red double-decker London bus. The set features various LEGO-related advertising posters on it, such as 'Read the Lego Times Daily' and 'Visit Lego Land'. 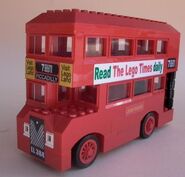 Retrieved from "https://brickipedia.fandom.com/wiki/384_London_Bus?oldid=1969216"
Community content is available under CC-BY-SA unless otherwise noted.