Brickipedia
Register
Don't have an account?
Sign In
Advertisement
in: Class 4 articles, Sets listed for ages 6–14, Exo-Force,
and 5 more

3886 Green Exo Fighter is an Exo-Force promotional set released in 2007. It contains 19 pieces and a Ryo minifigure.

The set is small, given for free with the purchase of Duracell batteries. It includes a small walker with wings and a big gun under one wing.

The wings in horizontal position 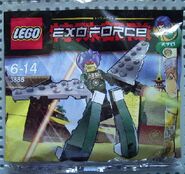