Starting with a 2x8 plate, then two angular plates, with two round flat tiles on each side. A brown 1x4 is put next to it, then two bearing elements, with wheels on them. On the front of the car is two fangs, and a radiator grille, and two head lights on either side, using flag pieces as mud flaps. Behind, and above the grille, is a 2x4 plate, with 2x4x18° plate, which also has the small, transparent white windscreen. Then, a driver's wheel is used, and enough room for one minifigure, which one is included in the set, the Zombie Driver, in his fourth appearance. A small rack-like piece, commonly used in lab sets, sits behind the small area, and holds a small light at the back. At the end of the car is two cones, with transparent-orange feather pieces made to look like coal burning. 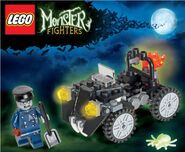 The advertisement
Add a photo to this gallery

x12px $75.00 (Free) +
Released
September 1 2012 +
ShopDescription
Dare to drive with the Zombie Car! … Dare to drive with the Zombie Car!</br></br>Dig into all of Lord Vampyre’s dirty deeds in the Zombie Car! Use the treaded rubber tires, flame-detailed exhaust and front grill fangs to get more grip in the graveyard or to rip down the roads in the land of monsters. Use the headlight detailing and glow-in-the-dark spider to light a path through the spooky night! There’s no eerie errand too tough for the Zombie Car.</br></br>* Includes Zombie Driver minifigure with hat and shovel</br>* Features a flame exhaust, fangs, headlights, treaded rubber tires and glow-in-the-dark spider</br>* Makes a great addition to any LEGO® Monster Fighters building set!</br>* Measures over 2" (5cm) long, 1" (2cm) wide and 1" (2cm) tall5cm) long, 1" (2cm) wide and 1" (2cm) tall +
Theme
Monster Fighters +
Title
Zombie Car +
Txt1
Zombie Driver +
Type
Set +
USPrice
$4.99 / 75.00 (Free) +