Year of the Pig

The Pig (豬) is the twelfth of the 12-year cycle of animals which appear in Chinese zodiac, in relation to the Chinese calendar and system of horology, and paralleling the system of ten Heavenly Stems and twelve Earthly Branches.

In Chinese astrology, "zodiacal" animals refer to fixed cycles of twelve animals. The same cycle of twelve is used for cycles of years and cycles of hours. In the case of years, the cycle of twelve corresponds to the twelve-year cycle of Jupiter. In the case of the hours, the twelve hours represent twelve double-hours for each period of night and day. In the continuous sexagenary cycle of sixty years, every twelfth year corresponds to hai, 亥 (the twelfth of the twelve Earthly Branches); this re-recurring twelfth year is commonly called the Year of the Pig (豬年). 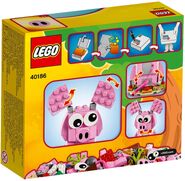 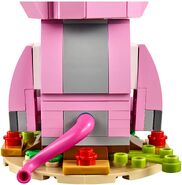 Retrieved from "https://brickipedia.fandom.com/wiki/40186_Year_of_the_Pig?oldid=2013549"
Community content is available under CC-BY-SA unless otherwise noted.
... more about "40186 Year of the Pig"
RDF feed
Ages
7+ +
ArticleRating
2 +
Image
40186_alt1.jpg +
InfoboxTemplate
Set +
Item №
40186 +
Minifigures
N/A +
Pieces
152 +
Price
Promotional +
Released
June 25, 2019 +
ShopDescription
The LEGO® Iconic Year of the Pig set featu … The LEGO® Iconic Year of the Pig set features a rotatable head and movable ears, arms and legs. The set also includes a display podium with flower and leaf elements, plus an embossed money envelope with traditional gold coloured print.</br></br>Free LEGO® Year of the Pig (40186) offer is valid for orders online at shop.LEGO.com only from 25/06/2019, while stocks last. Purchase of the LEGO Dragon Boat Race set (80103) required to qualify. Bricks & Pieces orders are not valid for this promotion. One gift per household. Cannot be applied to previous purchases. If the qualifying LEGO purchase(s) is returned to us for a refund, the gift must also be returned to us together with the qualifying LEGO purchase(s). It cannot be purchased, exchanged or substituted for any other item or cash value. Offer is not valid at LEGO Stores, LEGO Catalogue phone orders, LEGOLAND® Parks, LEGOLAND Discovery Centres or LEGO Certified Stores. The LEGO Group reserves the right to cancel or modify this promotion at any time without prior notice.romotion at any time without prior notice. +
Theme
Seasonal +
Title
Year of the Pig +
Type
Set +