Brickipedia
Register
Don't have an account?
Sign In
Advertisement
in: Class 2 articles, Sets listed for ages 10+, BrickHeadz,
and 4 more
English

Goofy is a funny animal cartoon character created in 1932 at Walt Disney Productions. Goofy is a tall, anthropomorphic dog who typically wears a turtle neck and vest, with pants, shoes, white gloves, and a tall hat originally designed as a rumpled fedora. Goofy is a close friend of Mickey Mouse and Donald Duck. He is normally characterized as hopelessly clumsy and dim-witted, yet this interpretation is not always definitive; occasionally Goofy is shown as intuitive and clever, albeit in his own unique, eccentric way.

Pluto, also called Pluto the Pup, is a fictional dog created in 1930 at Walt Disney Productions. He is a yellow-orange color, medium-sized, short-haired dog with black ears. Unlike most Disney characters, Pluto is not anthropomorphic beyond some characteristics such as facial expression. He is Mickey Mouse's pet. Officially a mixed-breed dog, he made his debut as a bloodhound in the Mickey Mouse cartoon The Chain Gang. Together with Mickey Mouse, Minnie Mouse, Donald Duck, Daisy Duck, and Goofy, Pluto is one of the "Sensational Six"—the biggest stars in the Disney universe. Though all six are non-human animals, Pluto alone is not dressed as a human. 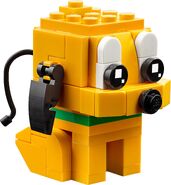 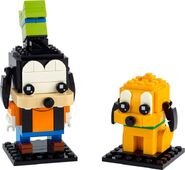