Brickipedia
Register
Don't have an account?
Sign In
Advertisement
in: Class 2 articles, Sets listed for ages 10+, 2020,
and 3 more
English

Sheep (Ovis aries) are quadrupedal, ruminant mammals typically kept as livestock. Like most ruminants, sheep are members of the order Artiodactyla, the even-toed ungulates. Although the name sheep applies to many species in the genus Ovis, in everyday usage it almost always refers to Ovis aries. Numbering a little over one billion, domestic sheep are also the most numerous species of sheep. An adult female is referred to as a ewe and an intact male as a ram, occasionally a tup, a castrated male as a wether, and a young sheep as a lamb.

Sheep are most likely descended from the wild mouflon of Europe and Asia; one of the earliest animals to be domesticated for agricultural purposes, sheep are raised for fleeces, meat (lamb, hogget or mutton) and milk. A sheep's wool is the most widely used animal fiber, and is usually harvested by shearing. Ovine meat is called lamb when from younger animals and mutton when from older ones in Commonwealth countries, and lamb in the United States (including from adults). Sheep continue to be important for wool and meat today, and are also occasionally raised for pelts, as dairy animals, or as model organisms for science. 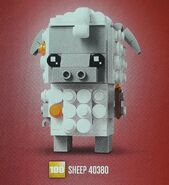 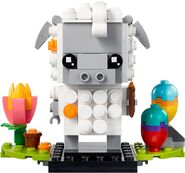 $15.99 +
Released
February 2, 2020 +
ShopDescription
Looking for a unique gift for Easter Sunda … Looking for a unique gift for Easter Sunday 2020? Then check out this lovable LEGO® BrickHeadz™ Easter Sheep (40380). With a colorful tulip growing at one side and 2 Easter eggs at the other, the super-cute sheep is using a paint pot and brush to color the eggs. No wonder there are paint splashes on its wool! Standing on a sturdy baseplate, the Easter Sheep is a fun, lasting gift idea for him, her, kids, boyfriend, girlfriend, husband, wife… at any time of year!</br></br>* This collectible LEGO® BrickHeadz™ buildable model of a cute sheep painting Easter eggs makes a perfect gift for Easter and looks adorable all year round.</br></br>* A fun way to wish a friend or family member ‘Happy Easter’, this set is a suitable building toy for anyone aged 10 and up.</br></br>* With 192 pieces and standing more than 3” (8cm) tall, this is a great buildable BrickHeadz™ sheep gift for kids, him, her, boyfriend, girlfriend, husband, wife… anyone who deserves a fun start to their Easter! who deserves a fun start to their Easter! +
Theme
Seasonal +
Title
Easter Sheep +
Type
Set +
USPrice
$9.99 +
Advertisement