40391 First Order Stormtrooper is a Star Wars Brick Sketches set that was released on June 15, 2020.

Stormtroopers, also known as First Order stormtroopers or "bucketheads," were the infantry soldiers of the First Order. As the latest evolution of one of galactic history's most distinctive symbols of military might, the First Order's infantry units were outfitted with stark white armor derived from that worn by the Galactic Republic's clone troopers and the Galactic Empire's identically named elite shock troops. To ensure absolute loyalty and conformity, First Order troopers were identified by alphanumeric designations instead of individual names and programmed from birth through regular exposure to state-controlled propaganda. Ultimately, members of this new generation of stormtroopers were trained to serve one purpose—conquering the galaxy in the name of the First Order. 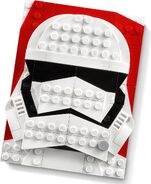