Koi is a colored varieties of the Amur carp that are kept for decorative purposes in outdoor koi ponds, water gardens or aquariums. The word of koi comes from the Japanese pronunciation of the common character between Japan and China 鯉 meaning carp. Koi, also called Nishikigoi, is the Japanese pronunciation of the common word between Japan and China 錦鯉 meaning brocade carp.

Koi is an informal group name of the colored variants of C. rubrofuscus. There is a description of koi with color variation in ancient Chinese literature, but many varieties of koi for ornamental purpose, which are now known around the world, originated from the breeding that began in Niigata, Japan in the early 19th century during the Edo period. Several varieties are recognized by the Japanese. Koi varieties are distinguished by coloration, patterning, and scalation. Some of the major colors are white, black, red, orange, yellow, blue, and cream. The most popular category of koi is the Gosanke, which is made up of the Kohaku, Taisho Sanshoku, and Showa Sanshoku varieties.

The set has 33 pieces, used to build a koi and a base. A 2 x 3 Black plate is connected to two White 1 x 4 x 1 bricks with inverted bows on one end, with a 1 x 2 Bright Orange brick in front and a 2 x 2 Bright Red plate in front of that. Connected to that end is a 2 x 2 x 2/3 White brick with inverted bow, with two 1 x 2 White angular plates hanging off either side of the red plate, two 1 x 1 Black plates with holders extending off either side of the orange plate, and a Bright Orange 2 x 4 (18 degree) plate behind those. A 2 x 6 White plate is laid across the whole top, with a 1 x 2 Black plate with knob behind that. Two 1 x 1 Black roof tiles are placed at the left end on the brick with bow, pointing inwards. On top of the right end of the top white plate is another 1 x 2 Black plate with knob, and behind that is a 1 x 1 Bright Orange plate with holder extending outwards, and on top of that is an identical piece but Black. On top of that is a Bright Orange 1 x 2 plate with bow. At the other end is a Black 3 x 4 mudguard, on top of that is two 1 x 2 plates with bows (White and Bright Orange), and two googly eyes are attached to the side. The fish is connected to a 4 x 4 Medium Azur circle plate with a 2 x 2 Transparent Light Blue brick. 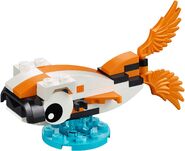